I'm happy to participate once again in Susanna Leonard Hill's Halloweensie Writing Contest! The rules this time are a story that is 100 words or less and contains the following words: glow-in-the-dark, goosebumps, and goodies. My entry is below. I hope you enjoy it.

A Tricky Tattoo
(100 words)
Going through my Halloween goodies, there is a bag with a goosebumps glow-in-the-dark temporary tattoo and a piece of algae green candy that smells like sweaty socks. I know it’s from Mr. Wonkers. He gives the worst treats so he gets our best tricks. “The candy will stop the spread!” is written on the back of the tattoo. I toss the candy in the garbage and put the tattoo on. The glowing goosebumps spread all over my body! I dive into the garbage and retrieve the candy. It’s disgusting but the goosebumps go away. You won this year Mr. Wonkers!
Check out the other great entries here.
Happy Halloween everyone.
Posted by Gregory E Bray at 11:46 AM No comments:

Here's my entry for this year's Valentiny writing contest hosted by Susanna Leonard Hill. I hope you enjoy it.

A Valentine's Day Quest in the Land of Moore
(208 words)

Darkness fell across the land of Moore. Wil was so close to the perfect Valentine’s Day gift for his mother he could taste it. All he had to do was brave the last three obstacles and it would be his.
He bounded over the squishy rocks of Coucherton like a kangaroo.
He scaled the cliffs of Libraria like a lizard.
Finally, he leapt like a sugar glider and grabbed the spinning blades of Windamore. He gripped the blades tightly and waited for the perfect opportunity to grab the gift.
The more the blades spun, the dizzier he became. He felt his grip slowly releasing. This was his only chance to grab the gift.
He stuck his arm out as far as he could and, “SHWACK!” the gift was in his grasp. He shouted, “Excelsior!” and released from the blades landing on the top of the cliffs of Libraria.
The darkness quickly disappeared with a bright flash of light.
“Wil!” his mother shouted. “What are you doing on top of the bookcase?”
“I rescued your Valentine’s Day gift. Happy Valentine’s Day!”
“Thank you honey. But that box of candy is for you.”
“Even better,” Wil said with a smile. He landed on the couch and tore into the candy.
Posted by Gregory E Bray at 9:38 PM No comments:

Wow! 10 years of great and short Halloween stories thanks to Susanna Leonard Hill. This years rules are as follows: 100 word Halloween story appropriate for children (children here defined as 12 and under) (title not included in the 100 words), using the words skeleton, creep, and mask.  I couldn't think of a good name. So it's just, The Kid in the Homemade Costume, which comes in at 99 words, it was around 300 word until I got out a hammer and chisel, chainsaw, weed eater, etc. and whittled it down. Hopefully I kept the feel of the original story. I hope you enjoy it.

The Kid in the Homemade Costume
(99 words)

Sheila wondered who the kid was that followed her. The kid’s homemade skeleton costume creeped her out.

She came up with a plan to scare the kid off.

She quickly turned the next corner.

“Alright kid, stop following me while I trick or treat!” She demanded.

“I’m going to take off your mask and see who you are” she stated.

She lifted the mask and saw a skeleton kid. She screamed, dropped her candy, and ran home.

The skeleton kid picked up the candy and yelled, “Happy Halloween!”

It's hard to believe Susanna Leonard Hill has been hosting her Holiday Writing Contest for 9 years. I need to go back and look at the first years entries. The rules for this edition are a 250 word maximum story about a treat. More of the rules and stories here. My entry is below. I hope you enjoy it.
Happy holidays!

There is sugar in cookies. This bag of sugar should do the trick.

They need eggs. I’ll dump in a dozen. The shells should add a nice crunch.

I remember mom putting some kind of soda in there. All I have is root beer. I guess that will have to do.

I think flour goes in cookies. I won’t put in too much, just a pinch, I want them to be sweet.

All good cookies need chocolate chips. A couple of bags should be good.

That looks like everything to me. I’ll stir them up and get them in the oven.

It smells great in here.

They look a little dry. I saw a stick of butter on the counter the last time mom made them. I’ll rub butter on them and they should be perfect.

I’ll put them on this decorative plate near the fireplace with a glass of milk for Santa. Time for bed.

He left me a cookbook and a note.

Thank you for the cookies. They were very interesting. I gave some to the reindeer and they are now full of energy. We should deliver the rest of the presents in record time. I highlighted my favorite cookie recipe in the cookbook. I look forward to trying them next year.

It's time for the 9th annual Halloweensie Writing Contest hosted by the fabulous Susanna Leonard Hill. The rules this year are a story of no more than 100 words which contains the words potion, cobweb, and trick. My entry is below.

This potion I got from the witch doctor will help me shoot webs like Spider-Man and swing from house to house to get the most candy.

Time to trick or treat!

It must take time to activate. I’ll walk next door.

Sorry about the slimy cobwebs. May I have some candy please? 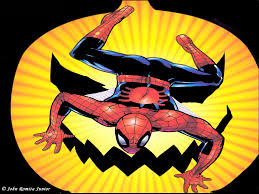 Check out the other great entries here. Happy Halloween everyone!

It's time again for the 50 Precious Word's writing contest hosted by Vivian Kirkfield. It's a fun contest with few limits except that the story must be 50 words or less. Mine comes in at 49 words. I hope you enjoy it.

Nibbles spied the cheese through binoculars and said, “The cat’s away. We need a Brielliant plan to get the cheese.”

“Yes, a cheddar one than last time,” responded Squeakers.

Nibbles scanned further and exclaimed, “Sacre blue cheese! The cat is disguised as a soufflé.”

Check out the other great entries here.

I didn't think I'd have an entry for the contest this year. Then an idea finally came to me. I keep editing little parts of it. Hopefully it will be fully completed by the time judging comes around.

The rules are it has to be about some sort of a Holiday Hero and must be 250 words or less. My entry comes in at 216 words. I hope you enjoy it.

The Hero Every Baker Deserves
216 words

Kara sat on her bed reading her favorite magazine Superhero Digest when a bitter sweet smell caught her nose.

“That smell…I know that smell.”

I wide-eyed look came over Kara’s face when she realized what the smell was.

“Oh no! Not this year too!” She exclaimed and bolted into her closet.

There was a bright plaid flash and the smell of fresh baked cookies filled the room. After a few seconds she emerged as the superhero Bain-Marie, savior of baked goods everywhere.

She flew out of her bedroom and down the stairs into the kitchen.

She grasped the oven door and flung it open.

With her super protective oven mitt like hands, she grabbed the tray of cookies and pulled them from the oven.

“Phew!” She exclaimed. “Got them out just in time. We can’t give Santa burnt cookies two years in a row.”

She placed the cookies on the counter to cool.

She picked up a cookie and started to take a bite when the smell of the ocean filled her nose.

“Someone has used salt instead of sugar in their cookies. No time to eat, there are more Santa cookies to be saved!”

She set the cookie down and flew off to the next house to save another batch of cookies from certain doom.

Check out the other great entries here.